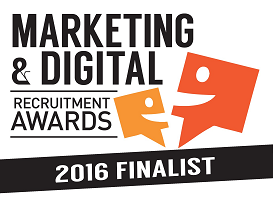 The Candidate is proud to announce that they have been nominated for a total of 6 awards at this year's prestigious Marketing & Digital Recruitment Awards, held in London this November. Following another strong year of growth, doubling their office space in Manchester's Spinningfield's area and increasing head count by over 1/3, the nominations are testament to their success.

The Marketing & Digital Recruitment Awards, hosted by the jobs website OnlyMarketingJobs.com, were created in 2010, in order to highlight the wonderful achievements that marketing and digital recruitment agencies all across the UK have achieved throughout the year.

The Candidate is delighted to have won a number of these sought after awards over the past few years; including The Best Regional Agency award in both 2013 and 2014. Last year, their fantastic Ecommerce Recruitment Director, Laura Walters, won the title of Recruitment Consultant of the Year, following the same success in 2012 and they are hoping for some success at this year's awards.

This year's nominations include:

The Candidate would like to thank all of their clients, candidates, trade bodies and followers for the recommendations and help in achieving these nominations. Well done to the whole team at The Candidate for their hard work, passion and dedication, which has got the company to where it is today.

The award ceremony takes place in late November and the team can't wait to update you then.