Interested in social media engagement? Read six ways to have a successful social media campaign from one of Manchester's best up and coming social media agencies.

The Candidate recently attended the "Create. Influence. Engage" event to hear more from the brilliant guys at Social Chain - and we were in for a treat! Social Chain is a Manchester based digital agency that focuses on social media engagement and are creating some of the most influential content you can imagine! They hold the title of Europe's largest Influencer Marketing Agency with an envious client base that consists of Disney, BBC, Universal, McDonalds, 20th Century Fox and Spotify.

We were some of the lucky few to have a ticket for the sold out event. We were welcomed into the Hello Work Studios on a cold, crisp February evening and didn't really know what to expect. Upon entering you could feel the buzz and the hubbub where people seemed to know each other whilst drinks, pizza and even ping pong was on offer! We already felt like we are in with the in-crowd, which was not far from the truth, as you are dealing with this young innovative company who seem to be leading the way. They started in humble beginnings as university students in a borrowed tutorial room in Manchester Metropolitan University and now are estimating a net value £6 million by the end of their second year trading. They now boast premises in Manchester, London and most recently Berlin. 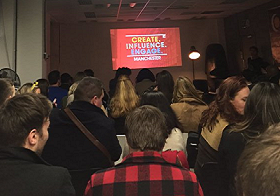 We were then ushered into an intimate room for the beginning of the evening's proceedings and were given some sweets to gnaw on and keep us entertained. The evening began with a presentation by Cathal Berragan on youth focused content followed by a panel discussion hosted by Nick Crompton. This featured musician Frankie Cocozza, Jack Dean and Becca Rose on the changing landscape of influencer marketing and a finale by Social Chain CEO Steve Bartlett on social engagement & insight.

So what did we learn?

1. Fiction gone viral
Ever heard about Rex Secco? No, neither have we, because he's a made up footballer Social Chain created to start a media storm in the lead up to the Soccerex Global Convention in Manchester. The rumour that Arsenal were buying a 16 year old for £34m named Rex Secco (an anagram of Soccerex) went viral on social media. This led to Arsenal being questioned and having to release an official statement dismissing this as a hoax. Now that's creative content!

We don't all have to create our own Rex Secco, but these guys know what they are talking about and we were hooked on hearing more creative advice!

3. Companies need to let go and create a brand on social media
Another key point from the event, was that companies need to let go and let their brand become well known. No matter if it is positive or negative - people talk! Create content that makes people talk about your brand. It is better that they know you from either a positive or negative image, than not knowing you at all!

4. Become part of the conversation
Is something trending or is everyone talking about the same thing? Join them! Take the relevant story and tailor it according to your brand. Use the same hashtags and create the awareness and lead people to your brand. Always make sure you are aware of what is trending on social media!

5. Platforms are not the same
If you are sharing content on several platforms for your company or even yourself (!) then remember that your audience is different! Twitter acts differently from Facebook and Instagram. Make sure you tailor the content according to the audience and platform you are sharing it on. A conversation in the boardroom is not the same as in the pub with your mates!

Social Chain predicts that Facebook will continue to grow and expand as a leading social media platform even though it has been online for a long time that there is still more to come! It's a platform that continuously changes and updates according to what the audiences want.  Also how platforms grow and develop is directly related to  technology and the advances in mobile phones such as bigger screens and video cameras on phones paving the way for videos and streaming on social media.

If you haven't already done so, do yourself a favour and check out Social Chain's Twitter page or website. You definitely don't want to miss what these guys get up to next!

Are you all about digital and looking for a new opportunity? We have a great list of Digital Marketing jobs!