Briony Sheard has been a long-standing connection of The Candidate’s and with an extensive career in digital marketing, who better to talk to the team about affiliate marketing than the expert herself! 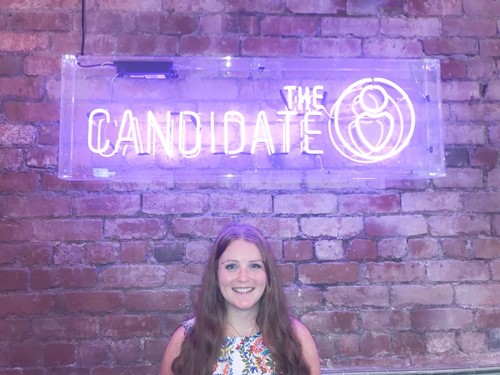 Having carved herself an impressive career in affiliate marketing, Briony has worked for some of the biggest companies in the UK including Sainsbury’s and The Hut Group so it’s no surprise that on a recent visit to the office, she was able to provide expert knowledge on affiliate marketing!

What is Affiliate Marketing?

Sure, the majority of people have heard of affiliate marketing but ask them to define it and I’m pretty they would be lost for words, so this is why Briony kick-started the presentation by providing us with a simple definition which everyone could get their heads around – ‘It’s a channel of affiliates (publishers), networks and merchants (retailers) which optimise conversion rates by forming unbreakable bonds’.

Performance – Based
Affiliate marketing is completely performance-based, this is because payment is only received once the desired action has occurred so it’s in someone else’s interest to market your business due to the monetary incentive. The great thing about affiliate marketing is that it allows companies to measure and track campaign performances in order to learn how to optimise conversion rates.

International Reach
If a brand was to focus solely on one affiliate marketing programme then it limits their ability to international and could mean that they are missing out on a large market. Global affiliate networks allows businesses to have access to local publishers so they have the ability to tap into different markets which they may have struggled to do otherwise.

Risk-Averse
One of the biggest advantages of utilising affiliate marketing is the fact that there are little risks associated with it. A company is only required to pay when the transaction has occurred unlike PPC campaigns which can cost a lot of money and yet still be unsuccessful. This means that it’s a ‘win-win’ situation for the business.

Traffic and Sales Catalyst
Affiliate marketing is used to fuel an increase in the amount of traffic and sales a company achieves by tapping into other people’s traffic as it allows them to cast a wider net in order to make themselves known to their target audience.

What does an Affiliate Marketer do?

Affiliate Marketers build and manage key relationships with affiliate partners by carrying out affiliate marketing activities which will help grow revenue.  Typically they aim to optimise campaigns through affiliate marketing channels whilst also ensuring that all ROI and sales targets are met. They will work in a reactive environment where they can track and validate promotions in order to achieve the desired transactions. With affiliate marketing becoming even more and more important to businesses, it’s certainly an industry to get into!

Briony’s top 3 skills for a successful career in Affiliate Marketing:

1. Relationship Management
The ability to forge, strong relationships with key figures is vital in order for affiliate marketing to be successful because a major part of the job is forming partnerships which will ultimately lead to the increase in sales.

2. Interpersonal Skills
Without excellent interpersonal skills, affiliate marketing would be very difficult since almost all aspects of affiliates involves communication and interaction with different types of people and businesses.

3. Commercial Acumen
Commercial awareness is a highly-valued skill in any organisation and it’s a relatively easy skill to develop by keeping your finger on the pulse in regards to the latest industry news. In order to target the right audience and achieve the required sales, it is important to have a strong understanding of the business and its needs along with what its competitors are doing – this information could be invaluable!

If you'd like our award-winning team to help you find your next affiliate role, call us today on 0161 833 1044 or email us at [email protected]

Take a look at our latest marketing jobs here.

Read all about our creative jobs here.

Read our other blogs here.