The Candidate win at Goals 4 Good 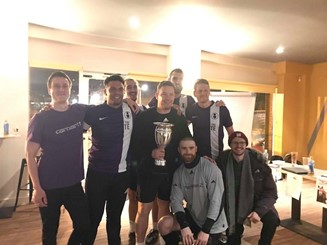 It was the 4th of April and although Spring has come, the conditions were Baltic and the rain was punishing. Something special took place. The Candidate entered, a team of 6 young strapping lads, plus Brian Matthews, our Director, into the annual Goals 4 Good Tournament which took place at Powerleague Manchester Central in Ardwick. The tournament is in support of Willow Woods Hospice who provide specialised care for patients with life-limiting illnesses. They provide care and help free of charge and really make a difference in peoples lives. (Click here and donate). So far, they have raised an outstanding £1,000 towards the hospice.

The Candidate’s team stormed to victory beating off stiff competition from media agencies and media sales houses from the Manchester region, with the likes of MediaCom, iProspect, Amnet, Regital, Wavemaker, Channel 4 all in attendance. The moment was made even sweeter, with The Candidate being the only recruitment agency in the tournament and receiving a fair amount of stick! This is the first time The Candidate has won the competition, and it was a decisive win at that, scoring 24 goals and only conceding 5 in the 7 games played. It was a strong performance overall, cheered on by some of our colleagues / WAGS in the office who were there in support. Individually, everyone was excellent but there were some standout moments, especially from club captain Brian who was reminiscent of Eric Cantona 20 years past his prime.

True to form, we prepared for the game in style by going to Pizza Express for an unhealthy pizza and sinking a few pints. Tactics were laid down using glasses on the table, a moment which left us wondering why our new Head of Contracting, Caldon Henson, hasn’t considered a career in management already! Team spirit was vital to the win and can only be put down to the lunch we all had together. Predictions were made and we were all quietly confident in our own abilities, despite never playing with each before. One concern raised was the lack of goalkeeping ability, with Christian Bloor ready to take on the duty, something we were all dreading. With a stroke of luck, our marketing intern Bailey mentioned he was a goalkeeper and away he was sent to go and get his goalkeeping kit and join the festivities.

We arrived at the tournament with a team already pulling out of our designated league, probably for the best as we were relentless in playing against the remaining iProspect and Mediacom teams, winning all 4 games, scoring 14 and conceding 2 in the process. Caldon and Arney scored the bulk of the goals, but the 2 standouts were a well-placed long-range strike from Dave Mullan and the captain taking one round the keeper as if he was on a Joga Bonito advert. Felix Peach, a member of the Analytics team here played particularly well and reminded those thereof a young Michael Owen, especially due to his injury prone nature, picking up a couple of knocks along the way and coming off injured in the final. Nonetheless, he showed a bit of flair that, when combined with the rock-solid defence of Dave Mullan and Caldon Henson and added to the target man and finishing abilities of our new accountant Arney up top, enabled  for some free-flowing football that was reminiscent Newcastle United’s ‘Entertainers’ team A must mention is the motivation given to us from self-appointed Manager Will Barron, who was providing Lucozade when needed.

On to the quarter’s, we went where we took on the Cheetham Belter’s team and punished them instantly. 3 goals were scored in 3 minutes and we were in the driving seat. Next up – Running Total. The semi’s provided a tough game and we went behind 1—0 before replying instantly and holding out for a 3-1 victory which saw us through to the final against Amnet. Dave used to play with the Amnet team, during his time at Dentsu which only added to the tension. The WAGs were in full swing by this point and The Candidate was cheered on all the way and never looked like losing, going onto win the final 3-1 for a special moment for those involved. Arney and Cal secured top scored spots by both getting on the scoresheet. 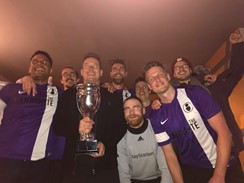 Celebrations began and we rewarded ourselves with a fair few hard-earned pints. Photoshoots over, we began to embrace the moment and lift the trophy. Food was provided with a donation towards the Willow Woods Hospice. Lining our stomachs for the inevitable trip into town where we were all in great spirits. Goalkeeper Bailey had the great idea of taking the match ball as a memoir for the tournament, which is now safely held within the office. Arriving into the office the next morning, it was clear that there were some sore heads but all for a great cause. Hopefully, we can repeat the same feats next time if we’ve come down from Cloud 9 by that point. 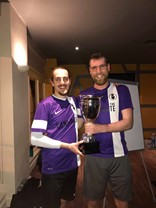 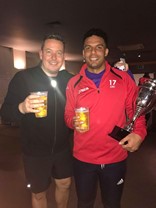 To read more of our latest blogs click here.

Check out our marketing jobs here.