For the 4th year running, The Candidate has been successful in picking up an industry award at the prestigious Marketing & Digital Recruitment Awards in London. In a glamorous ceremony with over 350 attendees at London's Hilton Metropole, Brian Matthews won the award of Recruitment Boss of The Year 2016 for his outstanding achievements in the last 12 months. The award adds to the previous years awards including Regional Recruitment Agency of The Year twice in a row and Recruitment Consultant of The Year twice for two separate members of the team. 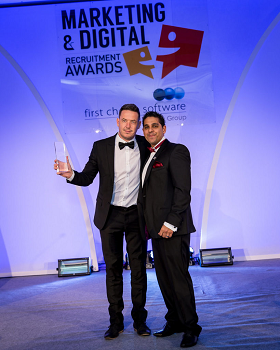 The criteria for this year's award success was for the Recruitment Boss of The Year to be an outstanding leader of the agency and the team. Brian has spearheaded the agency's sustained growth since its launch in 2012, taking it from newcomer to forecasted billing of over £1m in 2016/2017. The judges saw his inspirational leadership as a stand out element as well as ability to retain significant industry visibility with clients, candidates and marketing events across The Northwest. Brian has helped The Candidate build tangible commercial and benevolent relationships and ensured outstanding PR for their organisation.

"It is Brian's unique and effective approach to Marketing Recruitment that has led to this well deserved accolade. He can train recruiters new and old to successfully place leading candidates in roles they deserve. Our impressive conversion rates for filling roles and placing candidates are at heights not seen anywhere he's worked previously, meaning a really efficient service for clients and job searchers. We have a great team built on his approach and we're only going to continue growing that."

The award comes as The Candidate announces a 78% uplift in turnover and the doubling of office space in its recently renovated offices on Quay Street near Manchester's Spinningfields hub. The agency now employs 20 people and predicts growth in its 5th year to £1.3m in recruitment fees from the Northwest market and beyond. Clients that have contributed to this growth include Mediacom, JD Sports, Missguided, MEC, WeBuyAnyCar and Dentsu Aegis. This has also lead to a 120% growth in candidates placed year on year. 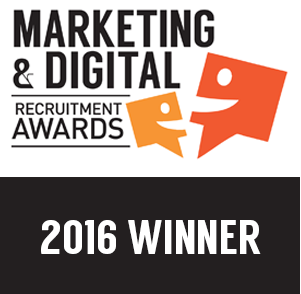 "I am absolutely delighted by this award which only proves the value the team at The Candidate are adding to Marketing Recruitment in Manchester and the Northwest. It really is such an exciting place to be right now and we have been able to adapt and develop a really successful agency as a result of the region's growth in digital marketing. Gone are the days when recruitment in the region was seen in a bad light, our clients really see the true value we add as we continue to up skill their employee bases using our talented, professional and driven team.'