Let's get digital: How important are the 5 P's in digital agencies 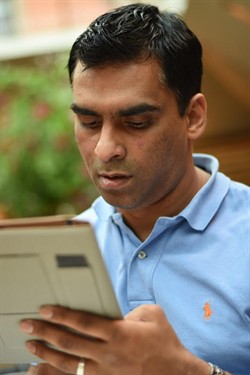 A guest blog from Karim Laljee, a digital media fanatic with a passionate knowledge for social media, writes all about why he leaned towards Social Media in his career and specifically how important the 5 P's are to digital agencies.

It was while looking at a picture of an aftershave bottle in my class during an 'A' Level in Business Studies lesson that I first realised the importance of Marketing.  For those of you wondering what was so special about this aftershave bottle, please refer to a book by Dave Hall, Rob Jones & Carlo Raffo, called; Business Studies. To cut a long story short it showed a bottle of aftershave and the percentage allocated to the cost of bringing that bottle to the shelf.  I distinctively remember marketing being the lions share at a staggering80%!

Several years later, it was the wanting to be part of this 80% that motivated me to complete my Post-Graduate Diploma in Strategic Marketing, while working full time in a demanding role as a Tesco Manager. I still remember going up to my car on my lunch breaks and revising for my exam.

Now fast forward 10 years or so, we now live in an era of Digital Marketing. So what is Digital Marketing? Is this a new phenomena or just a branch of marketing? Over the years we have all experienced a change in marketing techniques and approaches, some of which are still used today.  If we think back over the last 20 years, we will recall things like… Flyers in the local library, competitions on confectionary wrappers, letters with a cheque with your name on it (All you need to do is claim!), telephone sales, being approached in a local mall, email marketing, text messages and up to more modern technology of Social Media, PPC, SEO and cookies! All of which are ways that companies use to get their hands on your money.

However, have the fundamentals changed? When I think back to University and studying it was always about the 4 P's (as proposed by E Jerome McCarthy in 1960) and occasionally argued by many the 5th P too… The 4 P's are often expanded to the 7 P's, but we'll park that.  The four P's as most marketing professionals will know are… Product, Price, Promotion, Place and the 5th is People.

Social Media provided me with a platform to help others. 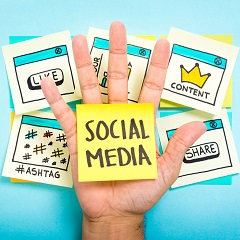 Five years ago I started using social media very actively. At the time it was to promote a 3rd Sector organisation I'd setup, Positive About MS. The aim being to help those like myself, affected by the condition, Multiple Sclerosis, to take a can do and positive approach. I basically had a website and wanted to tell people about it. At the time I had time on my hands and realised the best way to promote the website for free, was to use social media. So that's what I did.  At the time I thought it was a bit of fun and something I found interesting. I went about helping other organisations with their social media and set up other social media accounts for different subjects and websites I'd created.

Coming back to the present day, this new skill-set of social media had become very much 'in demand' and it was regarded as a talent and not just something you did to pass the time.  However, it wasn't until the spring of 2014 when I realised this. A good friend of mine called to ask how I'm doing and if I'm still doing the social media?  I replied, 'Yeah sure, it's a good laugh'.  He said, "No it ain't mate, people are getting paid to do this!"  Following on from this call, he prompted me to Google, 'social media jobs'.

At this point, I didn't just want to be another one of those people who sticks the words "Social Media Consultant" next to his LinkedIn profile without knowing what it means.  So I enrolled onto a CPD course, SSMM (Search & Social Media Marketing) at University of Salford Business School in MediaCityUK, to cement my understanding of the subject. It really was a fantastic course and helped me realise what skills I had picked up in the previous five years and also filled in the missing parts of the jigsaw.

Can the same principles of marketing be used today on social media?  Where on platforms such as twitter you have a maximum of 140 characters to get your message across, sometimes even less if you choose to include pictures or a link!  You can see how this has changed the landscape of marketing altogether. I would argue the technological advancements that we've seen in the last 15 years and what we are going through now, eclipse any period since the invention of the wheel in my view.

Now let us focus on that 5th P -People.  We mention earlier about people using phrases like 'Social Media Consultant' and 'Social Media expert' to describe themselves.  This may sound great and help 'market' them, but is it accurate?  We have to be honest and say in the ever changing world we now live in and with organisations such as Google, Facebook and Twitter making changes to their algorithms and functions as they see fit, that a teenager at school could conceivably know more about a particular social media channel than you or I. But, the question is, does that mean they know marketing, or if you prefer, does that mean they understand digital marketing?

It is important that we understand the tools we have at our disposal and the effect they can have on our businesses.  However, that doesn't mean that we have to necessarily be the ones using them?  An example I often use is this.  We all know how to make a cup of coffee, but we still go to Costa (or whatever your desired choice of coffee shop is).  Why is it?  It's simple; mostly for convenience and to secondly to save time.  The same with social media marketing, you may understand the basic principles of social media, but does that mean that you're the one to do it.  Could your time be more effectively used elsewhere and is it cost effective for you to be doing your own social media, when you could be out there securing a new account?  Imagine every time you wanted a coffee that you got out from your bag, a thermos, coffee beans, a grinder, sugar and milk, not forgetting your cup and spoon. If you visualise that, it just doesn't sound productive, does it?

To conclude, it's vital to get this 5th P right!  I'm sure we've heard of many businesses and organisations that have spent money on so-called social media experts or marketing agencies, only to find that a few months down the line they have not got the promised results and have spent £000's! This is why it's vital to get the right person or Digital Marketing Company. It's also important to know who the individual is, what's their background and experience, and in the case of an agency, who are they and who works for them?  I believe a good way to start would be asking the individual or agency a question…  Have you heard of the 4 P's?

If you would like any more information or advice on Social Media or your Digital Marketing Strategy, or you'd just want like a chat, please feel free to get in touch.  I would be happy to provide a one hour consultation at no charge to the first ten people quoting 'CandidateKaz' when contacting us at - www.soc-med.co.uk on 0161 410 4455 by 4th December 2015.

If you prefer to tweet, I'm @mrkazlaljee and I am also on Linkedin.