Is new media finite or infinite?

Guest blog from Adam Maidment, a Digital PR Specialist at NeoMan Studios in Manchester. Adam shares insights from the New Media Europe conference which featured keynote speakers from across the World.

"Is new media finite or infinite?" was the question that Peter Billingham, master of ceremonies at the New Media Europe 2015 conference last week, opened the weekend with. His own intention of the weekend was for every single attendee and speaker to answer one simple question: What are you going to do about it?

The line-up for the conference included some of the most experienced individuals in new media including podcast producers, media consultants, brand strategists, authors, editors and motivational coaches who were all there to answer the very question Peter posed in their own way and understanding.

Kicking off events was a keynote from Cliff Ravenscraft, a podcaster and media consultant, who wanted to ask how the world could be changed with the content we create. Starting his online career with a weekly podcast based on the American TV show Lost, Cliff got off to a very rocky start. Receiving comments from numerous people telling him his show was awful and that he should quit, he decided to turn the negative into a positive and address what he could do to improve.

After realising that you can't please everyone all the time he decided to "forget about the naysayers" and focus on what mattered to him. Fast forward to now when he owns his very own podcast production network and works on numerous different shows. He fell in love with podcasting and creating content after looking at the majority of responses he got from people and realising he was having a positive and powerful impact on people by creating entertaining, educational and inspirational content.

Inspired by the 1997 advert by Apple in which it challenged people to think different and become one of the crazy ones - as "the people who are crazy enough to think they can change the world are the ones who do", Cliff came up with four life changing actions.

Identify your audience and the message you are delivering, then grasp onto it and make it relatable.

Be the crazy person and change the world - Do what matters to you. People will appreciate the individuality and personality behind it all.

3.       Build a relationship with your audience

Interact with individuals, communicate through social media and make notes of things about them. When you show people you care: it shows.

Give people the opportunity to connect not only with you, but each other.

The overall message of the inspirational keynote was that most of all, remember to stay grounded and remember that this is who you are and this is what you are. Be crazy and be yourself - forget the naysayers. 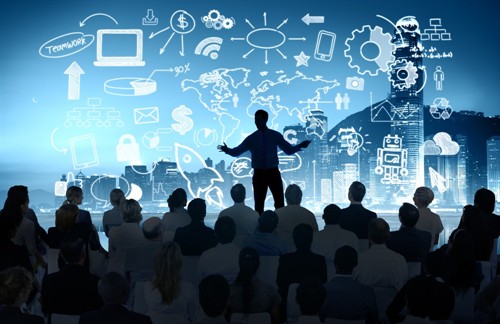 The New Media Europe 2015 conference in Manchester continued with a talk from Harmony Eichsteadt, a start-up coach and author from Texas. Her session was all about how important it is to not only build an audience but to build a community.

Building a community gives you a fall-back and a little bit of leeway when things may go a bit pear-shaped. People will be more forgiving as a community than they would as an audience. Without a community, you might as well be standing on just one leg.

"Being understood and belonging are among our most basic human needs. Even the best content can't compete with real community."

It is impossible to appeal to every single person and demographic out there, so figure out who matters most to your message and content and just try to appeal to them. It is important to think of a community as a net. Without all the strings and knots that form the net, you don't have anything.

Building a community matters because it is it meaningful and sustainable. The sense of community provides its members with the opportunity to be understood and have a feeling of belonging.

The three essentials to building a community are as follows:

Take on feedback, communicate with your audience to find what engages and resonates with them best.

Make your audience feel like you are on the same page as them, make them feel like they have a voice. Create messaging that clearly defines who's in and who's out.

What is the reaction from the target audience? Do they enjoy it? Resonate with 'your' people. This can then help you focus on different calls to action based on responses.

But most importantly, be sure to put people are the centre and prioritize making and keeping relationships. Find a way to reach out and keep in touch with your audience - the people that matter most to you and those that you matter most to. 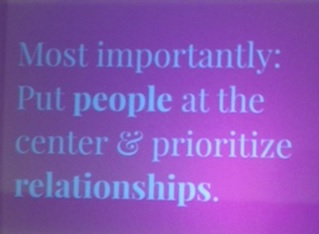 David Shaw was next. The Chief Marketing Officer from Virally, David Shaw, was next up to answer why good content was simply not good enough on its own. Content is king but if nobody reads it then it's irrelevant and doesn't matter. We need to put on a digital mind-set and consider how to reach out to new audiences and communities.

People are nowadays quick to point out that the over-consumption of technology in todays' culture has ruined us but that might not necessarily be the case. We have always wanted to consume content when it most suited us - in the past, we would listen to the radio or read newspapers nowadays our attention has just moved onto new and modern digital formats.

90% of all media interactions are now screen based. We spend an average of 4.4 hours of our leisure time a day in front of some form of screen. We are an on-demand audience and our attention is most certainly all over the place. We have a definite sense of FOMO (fear of missing out) and it's more than likely that the first thing and the last thing you touch each day is a connected device.

Today's digital currency is attention. The average persons' attention span in 2013 was around about 8 seconds. Compare this to the 9 second average for a goldfish and we start to feel a pretty bit worried.

You have to be able to grab your audience's attention, create content that matters to them and is worthy of their time. It's time to stand out. Be what people are looking for. It's time not keep up with the different and evolving world but to understand it. Figure out how to stand out and be what your customers are looking for.

The general consensus of the whole conference was to focus on how we create our content and how audiences preserve and take it in. It's time to think outside the box if we want to survive in a digital world.

If you missed the conference, worry not - you can download all of the sessions on MP3 audio files! Here's how…