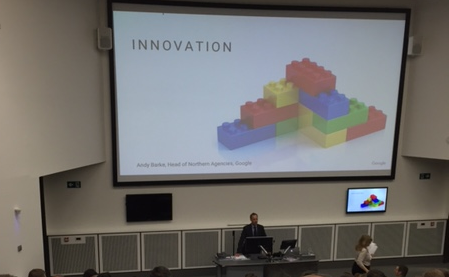 On behalf of The MPA Education Trust and The Candidate's, Colin Telford as the Treasurer we were delighted to be part of the Inside Google event. The event which took place at Manchester Metropolitan University Business School on Thursday 4th February. Kicki Holm, Melanie Telford and Imogen Connett were involved in the marketing and ticket sales at the event and contributed by promoting the event on social media & offering 40% off tickets whilst also live tweeting the event.

The MPA Educational Trust was founded in 1990 by Rupert Smith and the charity promotes education in marketing and advertising across the North West by offering bursaries and support to students.

The evening was led by Andy Barke, Head of Northern Agencies from Google with a presentation looking at the story of Google's journey beginnings up to the present day, what working for Google is like and their contribution in current projects which are breaking the borders of technical innovation.

Andy joined Google in 2005, and his main role is to build and develop key digital, marketing and media agency partnerships throughout the Northern Region.

Andy cemented the notion that Google's success is driven by always putting the customer journey first whilst staying at the forefront of innovation. All Google's products are developed to offer the complete user experience and Andy accepted that whilst not every Google product has been a success, as an organisation they always take positives and education away from sidelined projects ('sunsetted' in Google terms).  So what is next for the Google X team?  Perhaps the most high profile of the projects is the self-driving cars, which should be ready for trial in London very soon…drones delivering your parcels as soon as 2017…contact lenses to measure blood sugar levels for diabetics and project loon, an initiative which sends balloons into the stratosphere to form a communications network. Matt Skelton, Head of Technology recruitment at The Candidate attended the event and was really impressed with the organisation by the MPA, saying "Google has 2 UK locations in London and Manchester and for them to be involved with the MPA and Universities as well as a number of digital agencies across the city is not only brilliant news for the region's students but also further accentuation of Manchester being one of the world's leading cities for pushing the boundaries of tech innovation.  The talk gave us a great insight, not just into life working at Google but a number of the mind boggling projects they're leading"

Overall, the night was a huge success with a great turn out.  The Candidate would like to thank all the sponsors, students and Andy Barke for an insightful evening and for raising money for an exceptional cause. Thank you!

Melanie Telford, Marketing Executive at The Candidate said "It was a great night to be involved in, there was definitely a buzz in the air knowing 'Google' were speaking! Andy was great at simply and honestly telling us the amazing story of Google and how they make ideas become reality. What struck me most was how he explained there was no such thing as a 'fail' where learnings from these help grow bigger better projects."

Kicki Said "Andy Barke was a great speaker and my absolute favourite slide was a Google statement from 1998: "Our mission it to organise the world's information and make it universally accessible and useful". That just shows how big Google is today and I suddenly realised during the lecture how dependent we are all of Google today."

Imogen Connett who was also attending from Camp Leaders said "Let's imagine life 'BG" - Before Google. Or let's not … The Inside Google event was not only an amazing insight into Google and how they've come to being the biggest search engine but Andy Barke gave real pointers which anyone could utilize in the world of business. It was an awesome event for myself to interact with on social and show my friends I was sat in a lecture with someone from Google!!

Without the MPA providing great opportunities like this, I wouldn't be able to boast! I'm absolutely sure I'll be using some of Andy's inspiring ideas in my future career."

The MPA Trust founded in 1990 by Rupert Smith is a registered charity that promotes education in marketing and advertising in the North West by supplying bursaries to students and supporting many educational events. If you would like more information on how to get involved or to apply for a bursary then follow this link